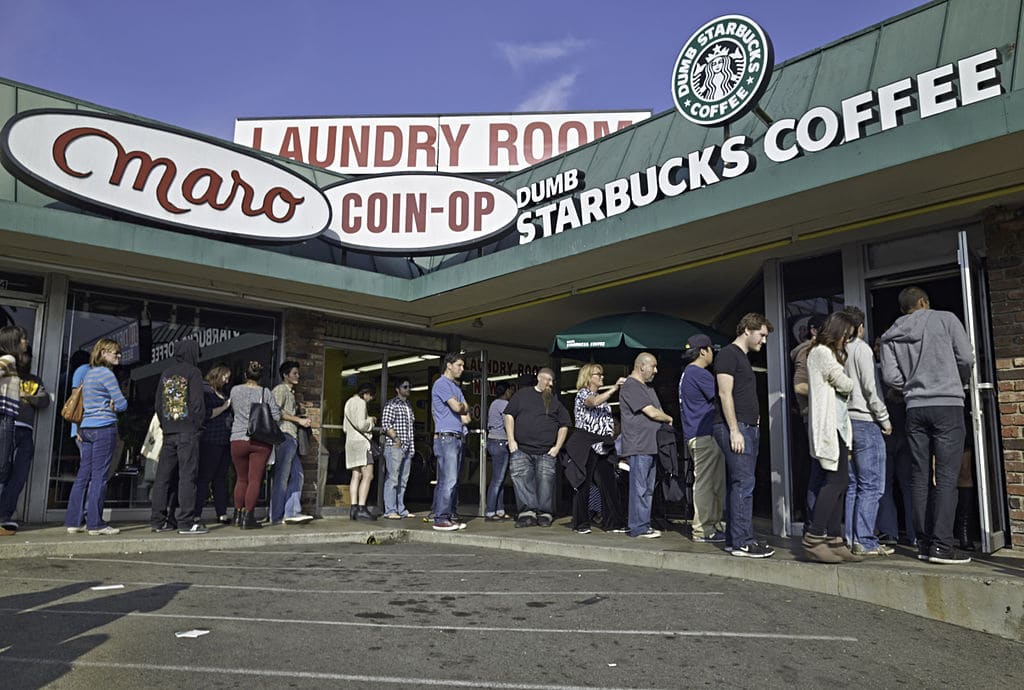 In it, he chronicles his Dumb Starbucks experiment, in which he opened a nearly exact replica of Starbucks, relying on parody law.

"By adding the word 'dumb'", Fielder stated, "we are legally allowed to use the coveted Starbucks name and logo because we've fulfilled the minimum requirements to be considered a parody under U.S. law." T he shop sold Dumb Frapuccinos and Dumb Norah Jones Duets CDs.

Being familiar with the media sensation that was Dumb Starbucks, I expected the episode to raise interesting issues regarding intellectual property law. What I found, however, was that the episode raised a host of other interesting and important issues as well. Some of the lessons that can be learned from the Dumb Starbucks experiment are discussed below.

In the next clip, Fielder dupes his lawyer into accepting all liability for Dumb Starbucks, when he signs an appearance release that also includes the assumption-of-liability language. Fielder asks his lawyer, "But you're a lawyer. Don't you read things before you sign them?"

The lesson here is obvious. If you are ever asked to sign a contract, read it. If there are aspects of the contract that you may not understand, consult a lawyer.

Stand up to Your Lawyer

You should not have to physically wrestle your lawyer for your own documents, as Fielder practically does in the above clip.

Also, try to keep copies of documents, just in case, and remember that --surprise -- hiding a signed contract in your pocket doesn't invalidate the contract.

Fielder appears to have devoted much of the Dumb Starbucks project to the big issue of using Starbucks branding through parody law. The project created great legal suspense about whether Starbucks would challenge Dumb Starbucks on the use of its brand. The issue garnered national attention and comments from prominent legal scholars.

Ultimately, however, intellectual property was not the undoing of Dumb Starbucks. Rather, Fielder failed to obtain the requisite approval from the health department and was therefore shut down.

The lesson? Don't let the big-think issues cause you to neglect the seemingly small but important details.

After hiring two employees, one of whom he finds attractive, Fielder holds an employee meeting to discuss workplace relationships. He opens the meeting by saying, "So, because of the size of the company, I'm also the HR department here," which is a concept familiar to many entrepreneurs.

After going over some basic ground rules of workplace relationships, Fielder goes off the rails, stating that because sexual tension is very distracting in the workplace, any employee who is attracted to another member of the team has to disclose that fact to HR. Fielder then goes around the team meeting and has each employee reveal to the group whom they find attractive.

Fielder asks his employees, "Who out of the people you work with are you attracted to the most, including bosses?" Obviously, each of his employees is visibly uncomfortable.

This caricature-ish satire helps highlight some of the pitfalls of improvising a sexual harassment policy. Sexual harassment is in the eye of the beholder. Don't assume that what feels comfortable to you will feel comfortable for your employees and co-workers.

The ostensibly well-intentioned acts of "getting things out in the open" or having group meetings to discuss personal issues can have the effect of contributing to a hostile work environment. While most people might think of themselves as sufficiently capable and sensitive to improvise on issues like sexual harassment, having well-considered, well-executed personnel policies is the best way to avoid liability and, even more importantly, create a positive and safe work environment for employees.